What are the Full Moon Names? Full Moon names have been used by many cultures to describe the full moon throughout the year. Different full moon names can be found among the Chinese, Celtic, Old English, and New Guinea cultures, among others. In addition, the Native American tribes used moon phases and cycles to keep track of the seasons by giving a distinctive name to each recurring full moon. The unique full moon names were used to identify the entire month during which each occurred.

Native American tribes gave distinct names to the full moon, the most well known full moon names come from the Algonquin tribes who lived in the area of New England and westward to Lake Superior. The Algonquin tribes had perhaps the greatest effect on the early European settlers in America, and the settlers adopted the Native American habit of naming the full moons. European settlers even invented some of their own full moon names that have been passed down through time.

The Wolf Moon is named after the wolf packs that howled hungrily outside of Native American villages in the cold and deep snows of midwinter January. The January full moon name was sometimes the Old Moon, the Moon After Yule, and even the Full Snow Moon.

Since the snow piles heaviest in February, Native American tribes often called this moon the Snow Moon. Among tribes that used this full moon name for the January moon, the February moon was called the Hunger Moon due to the harsh hunting conditions.

As the temperature increases and the snow begins to melt in March, the ground softens and earthworms begin to show their heads under the Worm Moon. Other signs of spring such as the cawing of crows (the Crow Moon), the crusts of snow (the Crust Moon), and the time for tapping of maple trees (the Sap Moon) gave rise to full moon name variations. To the European settlers, this moon was also known as the the Lenten Moon and was considered to be the last full moon of winter.

April brings the appearance of flowers and the herb moss pink or wild ground phlox, which is one of the earliest widespread flowers of the spring and the inspiration of the name Pink Moon. Other full moon names include Sprouting Grass Moon, Egg Moon, and Fish Moon.

The Flower Moon appears in may because flowers are abundant and in full bloom during this time. Other full moon names include the Corn Plating Moon and the Milk Moon.

The Strawberry Moon is universal to every Algonquin tribe and was named after the season for harvesting strawberries. European settlers called this moon the Rose Moon.

The full moon name for July’s full moon was the Thunder Moon because of frequent thunderstorms during this time. The new antlers of buck deer start growing in July, giving the Buck Moon its name. One other common name was the Hay Moon.

The fishing tribes are given credit for naming the Sturgeon Moon since the sturgeon, a large fish of the Great Lakes, were most readily caught during this month. Other full moon names include the Red Moon, Green Corn Moon, and Grain Moon.

September’s Harvest Moon was named because many of the Native American’s tribes’ staple foods were ready to be harvested around this time. However, the Harvest Moon does not always occur in September. Traditionally, the name goes to the full moon closest to the autumn equinox, which falls during October once or twice a decade. Sometimes the September full moon name was the Corn Moon because it marked when corn was supposed to be harvested.

October’s full moon is referred to as the Hunters Moon because after the fields have been reaped, the leaves begin to fall and the deer are fat and ready for eating. Hunters can ride easily over the fields’ stubble, and the fox and other animals are more easily spotted. Some years the Harvest Moon falls in October instead of September. Th full moon name for October’s full moon was also the Blood Moon or Sanguine Moon because of its bright color.

Beavers being to actively prepare for the winter in November, giving the Beaver Moon its name. Some tribes referred to this full moon as the Frost Moon.

During December, the winter cold fastens its grip and the nights are at their longest and darkest, giving the Cold Moon its name. This moon is sometimes called the Long Night Moon as the winter nights lengthen. The full moon name often used by Christian settlers is the Moon Before Yule.

Each year, the moon completes its final cycle about 11 days before the Earth finishes its orbit around the sun. These days add up, and every two and a half years or so, there is an extra full moon, called a Blue Moon. The origin of the term is uncertain, and its precise definition has changed over the years. The term is commonly used today to describe the second full moon of a calendar month, but it was originally the name given to the third full moon of a season containing four full moons. 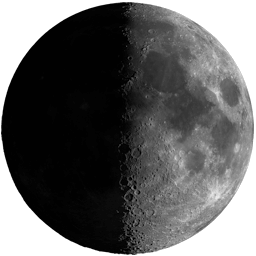