Full moon appears when the Sun and the Moon are on opposite sides of the Earth. As seen from Earth, all of the Moon’s surface will be visible. The Full moon is visible approximately from sunset to sunrise. When observed from Earth, the Moon can appear to be full for a couple of days, since more than 98 percent of the Moon’s disc is illuminated a day before or after the full moon. During full moon, the Moon may pass through Earth’s shadow causing a lunar eclipse. If the whole moon is in the Earth’s shadow, or umbra, a total lunar eclipse occurs. If only a part of the Moon enters the umbra, we see a partial lunar eclipse.

What is a full moon moon phase? A full moon takes place when the moon and the Earth are located on opposite sides of the Sun. At this time, the moon, earth, and sun are aligned in a straight line. A full moon moon phase is a lunar phase, in which the illuminated side of the moon faces the Earth and humans see the lighted side of the moon. Lunar eclipses are only possible during a phase of the full moon. When the geocentric longitudes of the moon and the sun are at a variance of precisely 180 degrees, a full moon occurs. An observer on Earth would see an almost completely illuminated and perfectly round moon. It is only during a full moon that the opposing side, which is not visible to an observer on Earth, is entirely unlit. Observers are faced with the illusion that the full moon is perfectly round, however the moon is actually more of an egg shaped and the pointed end is facing the earth. A full moon is a beautiful phenomenon which posesses the extreme glowing light and size in the sky to draw the attention of any viewer on Earth.

Very intuitive and productive time. Especially: Fertility; Magic; Dreams; Meditation; love; Matters of the home; Beauty; Money; Creativity; Psychic abilities. A time of heightened feelings. Not a good time for major decisions for they will be colored with emotional debris. Do not seek medical treatment, inoculations, operations are at its least favorable. Wounds bleed more, and the formation of scar tissue is more pronounced. 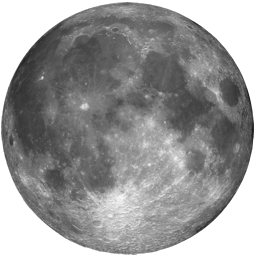